The Northeast and Eastern Seaboard of the United States are currently experiencing one of the most powerful winter storms ever, dramatically called a “bomb cyclone” (when a storm’s atmospheric pressure plunges as it explosively intensifies).  Dumping major snow, sleet & ice, bringing large wind gusts and below-freezing temperatures, causing power outages and grounding thousands of flights, this mammoth storm happens to coincide with the potent Mars/Jupiter conjunction.  Building to a peak late on Saturday, January 6, this aspect — which only occurs every two years — represents a period of intensity, high energy and overwhelming force.  And the fact that there are also 4 planets in chilly CAPRICORN right now only makes the situation more frigid and frustrating.   Stay warm and safe, everyone! 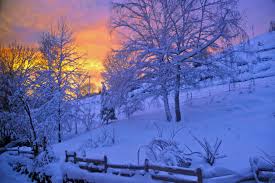 The joining of these two planets tends to amplify, augment, exaggerate or expand whatever is going on energetically.  On the one hand, it can be an excellent time for opening up to new possibilities & opportunities, making New Year’s resolutions and grabbing for the brass ring.  On the other hand, it can represent a period of power struggles, crises, emergencies and major challenges, especially since this conjunction is in the sign SCORPIO.   Hold your horses — and control your appetites & ambitions — while pursuing your goals.  Take it easy until this passes.

Be wary of irrational exuberance over the next few days, as it can stimulate an over-confident, reckless or high risk-taking approach to everything from athletics to financial activities. An aspect of “boom or bust”, the Mars/Jupiter conjunction can also represent a potential bubble in the money markets (think bitcoin).  And the Dow Jones industrial average topped 25,000 for the first time today!  Could the sky be the limit –or is the sky falling??

The violent, deadly street protests in Iran and the anger of the citizenry toward the “entitled” leadership of their country is certainly related to this aspect.  And the noisy dust-up between Trump and Bannon (clash of the Titans) that has just erupted is another example of the Mars/Jupiter conjunction at work.   Because of his incendiary comments about Trump & family in the upcoming publication of Michael Wolff’s Fire and Fury: Inside the Trump White House, Bannon is now at the center of this cyclone and in the doghouse.  Born under the sign SAGITTARIUS (ruled by Jupiter), he has never been one to mince words or opinions.  It is finally backfiring on him.  Mars in action!

Unfortunately, the fire and fury that’s been stirred up inside Trump will only continue to build up over the next few weeks.  With this “tell all” book ready to surface, and the fact that Mueller is hot on his trail these days, Trump seems ready to go off the rails.  Dramatic developments have been occurring daily ever since his progressed Moon entered LEO (the day after he fired Comey) — and things may be coming to a head as his progressed Moon conjuncts his natal Pluto in LEO on January 24.  This intense, tumultuous aspect could cause him to implode — emotionally or physically (perhaps his regular fast-food diet of McDonald’s cheeseburgers & diet Cokes will finally catch up with him — the Moon is associated with the stomach and digestion, as well as personal finances).  We have ample evidence of how Trump goes out of control and misbehaves when he feels threatened.  Let’s cross our fingers that there is no real “bomb cyclone” in our future!

PS  I just saw the new Star Wars movie.  It seemed like the perfect avenue for letting off some steam and experiencing that Mars/Jupiter conjunction in a positive way — powerful archetypal characters, over-the-top adventures and epic battles.  I highly recommend it!