Feeling an urge to howl?  The Full Moon in AQUARIUS & LEO is always a dramatic one — with a tendency to shock, surprise or disrupt us in some way.  This year’s  Full Moon , which peaks on January 31 at 5:27 am PST, will be unusually dramatic!  It is a total lunar eclipse, as well as a rare second Full Moon in the same calendar month (known as a Blue Moon).  It’s also a rare SUPERMOON (when  the Moon is closest to earth at the same time as a Full Moon).  And amazingly enough, it’s the second SUPERMOON this January − an even more rare occurrence.  According to NASA, this astronomical combination hasn’t occurred since 1866!  This particular Full Moon is called the Blood Moon because it will turn a red color.  For a more in-depth explanation of all this: https://www.unlv.edu/news/article/quick-take-once-super-blue-blood-moon 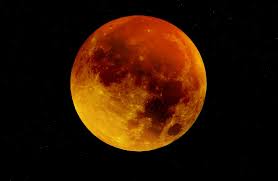 Another interesting fact is that there will be no Full Moon at all in the month of February this year; it’s a short month, with only 28 days.  The next Full Moon doesn’t arrive until March 1!

So what does all this extraordinary astronomical phenomena mean for us earthlings??  We are but a microcosm of the macrocosm — as above, so below!  Considering that Mercury will leave long-suffering CAPRICORN and move on to unpredictable AQUARIUS on the very same day as this Full Moon, we are obviously ready for some significant change of perception and awareness.   There is high-tension in the air!  Could there be wild revelations, allegations, political shakeups, separations, controversies, discoveries, breakthroughs, sudden insights, earth changes, electrical storms, power outages or UFO sightings?  Might we experience a collective awakening?  We’ll find out soon enough − this is the AQUARIUS month and the future is now!  Stay tuned, fasten your seat belt and hang on tight!

One thought on “ONCE IN A BLUE SUPERMOON…”