HAPPY NEW YEAR!  And are we ever happy to see 2020 in the rear-view mirror!  While last year turned us upside-down and inside-out, we have since learned how to function more effectively in this new reality.  This is the year to take it to the next level and do things differently!  The Great Conjunction of Jupiter & Saturn initiated a dynamic, new 20-year cycle last month in AQUARIUS.  This fixed air sign is associated with change, alternatives, liberation, equalization, innovation and teamwork.  A humanitarian and technological revolution beyond our wildest imaginations will be unfurling as 2021 begins to download. . . 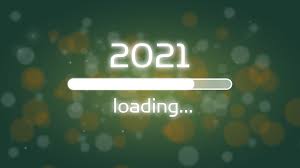 In the midst of dealing with a major reckoning from the past, we will be awakening to a new way of relating to one another, shifting the emphasis from “me” to “we”.   During the pandemic, we have become painfully aware that we’re all in this together and that our actions—locally, nationally and globally—powerfully impact each other and this planet we call home.  There will be resistance this year to the new paradigm that is evolving, but change is inevitable and we will be making progress, nonetheless — slow but sure.

2021 will be challenging us face up to social & financial injustices, racial & gender inequities and self-centered attitudes.  It’s ironic that on the last day of 2020, the US stock market and the pandemic numbers both reached new highs — as millions have been left without food, homes or jobs.  We have some significant work ahead of us to rectify this totally unbalanced situation! It’s auspicious that the Moon is in LEO as this new year begins.  You are alive, which is definitely something to celebrate! Cheers! The healing Mercury-Neptune sextile, also on January 1, calls forth a spiritual uplift — a time for positive thoughts, prayers & plans for a more enlightened future.  Allow the inspiration of Mars in self-reliant ARIES to assist you in creating the reality you desire. . .

From a numerology perspective, 2021 adds up to a “5” universal year.  Freedom, change & choice are highlighted in the year ahead, with the

emphasis on experiencing, experimenting and exploring.  Assert yourself, take some calculated risks, and make a big leap into new creative outlets and enterprises.  Let your curiosity be your guide.  High five!!

Be patient and commit the first few weeks of January—while the Sun’s in CAPRICORN—to taking care of business, organizing, clearing the decks, replacing the calendar, recycling and getting back to everyday routines after the holidays.  Home, family & property matters take precedence once Mars moves on to earthy TAURUS on January 6.  Following a volatile 6-month cycle in fiery ARIES, you’ll be ready to hunker down, get grounded and put your base of operations in secure, stable & comfortable condition.  Home sweet home! Building, remodeling, redecorating, landscaping or gardening projects could be positive & constructive outlets for channeling your energies over the upcoming 2 months.

Once Uranus turns direct in TAURUS on January 14 (after a 5-month retrograde), you’ll be feeling charged up and raring to go!  Electricity is in the air with the erratic Jupiter-Uranus square on January 17.  Surprises, revelations & shocking experiences will abound as this aspect builds up — a rebellious, contrary & unpredictable energy will be released at this time. This will intensify once the Sun moves on to AQUARIUS on January 19, followed by the disruptive Mars-Uranus square on the 20th (Inauguration Day).  Change and new directions are underway—resistance is futile!

The biggest question of the year concerns the coronavirus pandemic ‒ when will it end?  All indications are that we’ll need at least the entire year ahead for the vaccines to be distributed and the herd immunity to be developed.  However, it seems that the peak of the pandemic could be in sight once the the Lunar Nodes square off with Neptune on January 26 (due to consequences of holiday travel & social gatherings).  Chaos, confusion & misinformation will proliferate as this aspect gathers steam; avoid toxic people & situations and maintain strong boundaries in your relationships (despite the urge to merge).   Focus on your health, fortify your immune system and find positive escape outlets.  It is to be hoped that a wide enough distribution of the vaccines will begin to kick in by this point and start turning the tides. . . 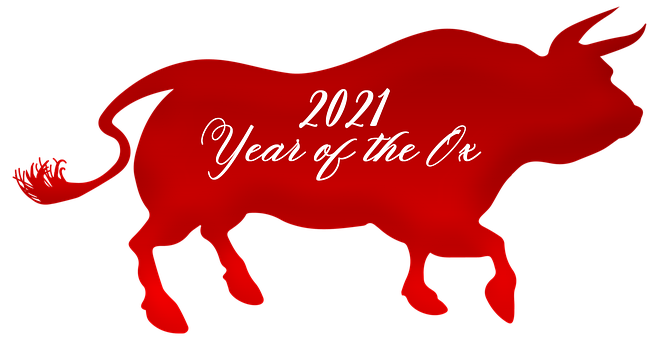 It’s out with the old, in with the new as the New Moon in AQUARIUS, on February 11, ushers in the Chinese Lunar New Year of the OX.  It is said that self-discipline, patience and steady efforts will produce solid rewards this year.  Success can be achieved through diligent & determined actions.  Set up productive routines, adapt healthier habits  and plow up some fresh fields.  Exercise and become strong as an ox.  Stabilize your foundations and support systems, and strive for increased comfort & security in your domestic scene.

The North Lunar Node (symbolizing prevailing social trends) is in GEMINI all year (and has been there since May 2020).  The focus is on exchanging ideas & information, networking, tuning in to local media, taking short trips and connecting with siblings, extended family & neighbors.

Be a good listener, improve your communication skills and avoid spreading questionable information or gossip.  Fix up your car or get a new one, hop on a bike or try out new ways of getting around.  Since GEMINI rules the lungs, nose, arms & hands, it will still be necessary to stay conscious of the air you breathe and people & places you touch.  Local jaunts will be preferable to long-distance travel (with the South Lunar Node in SAGITTARIUS).  It’s interesting to note that all of the vaccines currently available require 2 doses (GEMINI is  a dual sign).

Jupiter—the planet associated with knowledge, expansion & optimism—entered progressive AQUARIUS on December 19, ’20.  Its presence in this sign will inspire a great awakening, radical changes in religious, philosophical & educational thinking, shocking technological advances & inventions, non-conformist & rebellious tendencies and increased interactions with outer space.  It’s likely that metaphysical and astrological concepts will become more widely accepted & disseminated.  On May 13. Jupiter will enter PISCES for a 11-week sneak preview; health, immunity issues, psychic & spiritual development, oil & gas, toxic dumps, the ocean and pets will be prominently featured.  Jupiter re-enters AQUARIUS on July 28, and will stay there through December 28.  Much will be revealed in unexpected ways this year — be open to miracles, revelations & self- discovery!

Saturn is also in AQUARIUS these days, and it will stay there until March ’23.  The planet associated with tradition is now in the sign associated with the future.  Commit to growth & progress!  You can expect to see serious developments in the fields of biofeedback, artificial intelligence & robotics. Tele-medicine, telecommuting & conferencing and distance education, along with working from home, will become more mainstream.  To function effectively in this rapidly-changing world, you will need to update your phones & computers–as well as adapt to new apps & software–just to keep up with the fast pace of the technological advances!

At the same time, cybersecurity will become a huge issue.  It was recently revealed that vital governmental institutions, such as the US Treasury & State Departments, along with numerous major corporations including Microsoft, suffered a serious security breach that actually began when Saturn first entered AQUARIUS last spring.  The electrical grid, satellites and computer systems will be particularly vulnerable to hacking, as well as to disruptive electrical storms; our cellular, internet & cable television services could be periodically interrupted by power outages or unexpected breakdowns. You’ll want to be disciplined in backing up all your electronic systems (and it might be a good idea to invest in a generator). We will become increasingly aware of our inter-connectivity — and of our dependence on technology. Saturn will square Uranus 3 times this year: on February 17, June 14 & December 23.   Those attached to the status quo will be putting up resistance to the unrelenting forces of change, which can create strong tensions & conflicts.  Protests, reactionary & revolutionary activities, political confrontations & obstructionism will be a major theme of this year.  It’s the past vs. the future, old vs. the new and conservative vs. liberal.  Our evolution will proceed in fits & starts.  In the US, we will also be revisiting democratic ideals and restructuring the laws of the land to protect our values & freedoms.  By joining forces with those of like-mind, much can be accomplished — teamwork makes the dream work!

Unpredictable Uranus has settled down into its 7-year stay in TAURUS (May ’18—September ’25), continuing to stir up significant changes, rearrangements and disruptions in home, family, property & community matters.  The role of Uranus is to free us from old patterns,  habits or routines  — and to hasten our evolution. We are in a process of questioning the foundations, structures, support systems and comforts that we’ve taken for granted in the past.

Environmental concerns, sustainability, global warming, territorial borders, land use, agriculture, earth changes and population shifts will become even more potent issues.  Feng shui concepts will enjoy a renaissance as we seek greater peace & harmony in our personal spaces.   Many will consider pulling up roots, moving their base of operations and seeking greener pastures, perhaps related to the weather, earth changes, political chaos, taxes or lifestyle choices.

The continuing presence of Neptune in PISCES (2/3/12–1/26/26) will hopefully bring more attention and compassionate approaches to physical & mental health care, workplace safety, drug policy, medical/recreational marijuana, animal welfare, race relations & gender issues.  Pluto is near the end of its transit of CAPRICORN (1/08–3/23); the world will remain in the throes of a breakdown, transformation & renewal of existing structures, governments & economies. Its long-term square to newly-discovered Eris suggests that climate change issues will continue challenging us to face the realities and make some long-needed changes.

The placement of Mars indicates the nature & quality of available energy as it shifts from sign to sign.  As this year begins, Mars is in enterprising ARIES, where it’s been  for the turbulent past 6 months.  It will be a welcome relief once it re-settles into comfort-oriented TAURUS on January 6; you’ll want to  channel energy into planting, constructing and creating more security & stability in your home, family and base of operations.  Once Mars moves on to breezy GEMINI on the evening of March 3, you’ll be itching to hit the road, get back in circulation, exchange ideas & information, and connect with relatives & neighbors.  Variety is the spice of life!  On April 23, Mars enters nurturing CANCER, where the focus will be on food, fuel, finances & feelings.

Once Mars moves on to sunny LEO on June 11, put energy into revitalizing your life and personal environment.  Enjoy just being! Plan to focus your energies into work & health matters once Mars enters efficient VIRGO on July 29.  When Mars moves on to sociable LIBRA on the evening of September 14, it’s the time for participation & collaboration.  Join up with those who share your interest & ideals!  On October 30, Mars moves on to its own sign, SCORPIO; clarify your personal & professional goals, set positive intentions and go for what you want!  Mars enters SAGITTARIUS on December 13, staying there through the beginning of the 2022.  Travel, education, sport, philanthropy and marketing activities will be highlighted as this year comes to an end.

It’s always wise to be aware of the three Mercury retrograde cycles in the year ahead, which will occur on January 30—February 20, May 29—June 22 and September 26—October 18.  These are the times for reviewing, editing & regrouping — but not for start-ups of any kind (such as undergoing elective medical procedures, signing contracts or buying cars, computers & electronic equipment).  Instead, utilize these cycles to repair things, file, de-clutter, clear the decks and catch up with yourself! 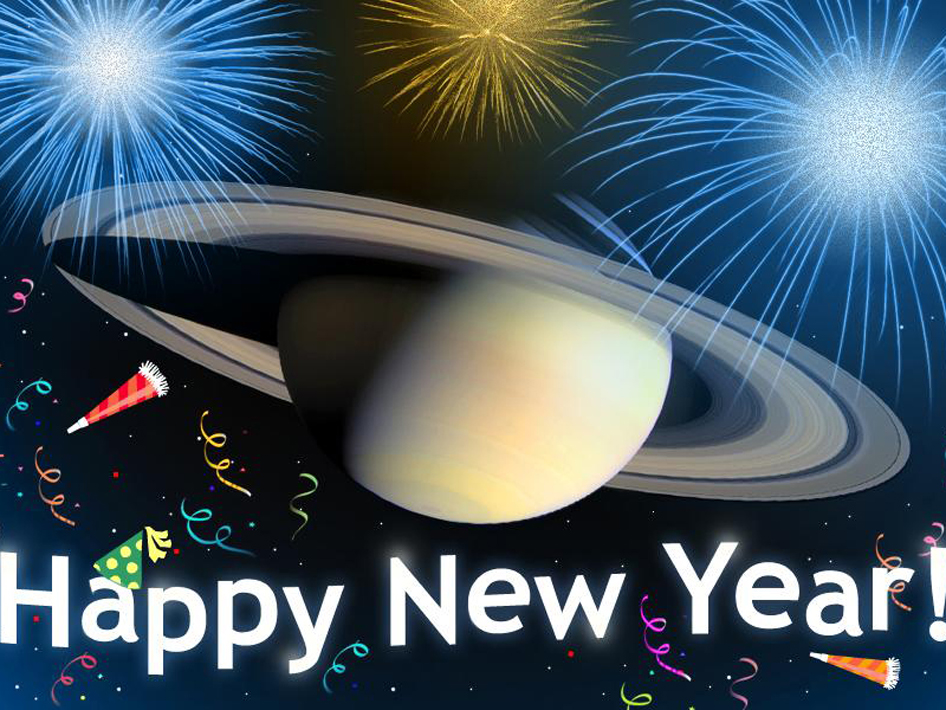 You have the opportunity to experience increased spontaneity, enlightenment & individual freedom for yourself this year in spite of the limits placed upon you by the pandemic protocols.  May your personal evolution be accelerated in a safe & healthy way — and may you easily overcome any restrictions or obstacles in your path.  Here’s wishing you a very Happy New Year — and a stellar 2021! ♥