Carl Payne Tobey — a pioneering astrologer, mathematician and researcher — challenged the conventional system of associating the astrological house principles with the zodiacal signs.  He advanced the theory that, while the houses of the horoscope run counter-clockwise, the signs of the zodiac run clockwise (based on the diurnal motion of the Sun).  In this system, the sign LEO is associated with the first house, instead of ARIES, and continues in reversed order with VIRGO/12th, LIBRA/11th, SCORPIO/10th, etc. 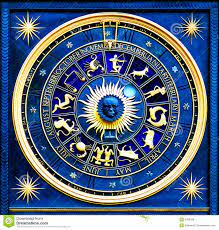 This reversed wheel traces its roots back to the Dendera zodiac and other artifacts of ancient Egypt.  Much of the ancient astrology was lost or misinterpreted by Ptolemy and the Greeks, whose ideas still form the basis of today’s astrological traditions (they also believed that the planets revolved around the earth!).  With Pluto now in the sign CAPRICORN, it is an appropriate time to revisit the ancient roots of astrology and rediscover some old gems… This Universal Zodiac (my name for it) forms the basic foundation & background for the horoscope, which is set up like any other horoscope except for being in the equal house format.  The interpretation of each house is similar to the conventional approach — it is just the sign & planet associations with each house that are different, with the exception of the 3rd & 9th houses.  It is on this particular axis that the wheel is flipped, and through the mirror image, the traditional signs associated with the 6th & 12th houses are reversed.  Perhaps this is how the ancient astrologers kept their special knowledge secret from the masses — they hid it in plain sight!  This alternative approach to chart interpretation appears to be a much better fit than the “flat” or “natural” chart background commonly used (it only fit for ARIES, anyway).  The counter-clockwise “flat chart” was not used by the ancients, and was only introduced about a century ago.  So let’s move forward — and go clockwise!

Until the 18th century,  Saturn represented the outer limits of our knowledge of the solar system.  Astrologers only worked with the Sun, Moon and the 5 planets.  Each planet was associated with two signs, while the Sun and Moon were associated with their own signs.   Carl Payne Tobey came up with the theory that the 12 signs could be divided into 6 pairs, each representing the opposite phase of a similar principle.  He referred to them as mate signs.

In the last 235 years, our technology has advanced to the extent that we’ve discovered three new planets — with more on the way.    When Uranus was discovered in 1781, it seriously upset the established order of the things (around the time of both the French and American revolutions).  It also upset the entire scheme of planetary rulerships.  However, it didn’t take too long for the astrologers to assign its primary rulership to AQUARIUS, which had been co-ruled by Saturn.  Subsequently, Neptune, discovered in 1846, was assigned to PISCES, which had been co-ruled by Jupiter.  Up to this point, the assignment of the new planets to the astrological signs followed the ancients’ pattern, which was based on the mean distance as measured from earth.

However, when Pluto came along in 1930, it was arbitrarily associated with SCORPIO, breaking with the established pattern.  Based on the natural mathematical design, the primary rulership of Pluto would belong to ARIES.   In the clockwise house system, the association of Pluto with ARIES, instead of SCORPIO, is another area of difference with tradition-based astrology.

From my nearly half a century of research & experience with these principles through the charts of family, friends, clients & students, it is very clear to me that these correlations are highly accurate and appropriate.  I could never go back to using the old system!  If you are interested in knowing how my path led to this particular system, I invite you to read the page on Why I Use the Clockwise House System.

There are likely two more planets to be discovered in order to complete the pattern of twelve.  Eris, a dwarf planet discovered in 2005 beyond Pluto, is possibly a candidate for the rulership of TAURUS.  However, more research & observation needs to be done on Eris before its role in our solar system — and in the astrological pantheon — can be clarified.

For further study of the clockwise house system and the theories of Carl Payne Tobey:

An Astrology Primer for the Millions by Carl Payne Tobey

Foundations of Astrology by Naomi Bennett